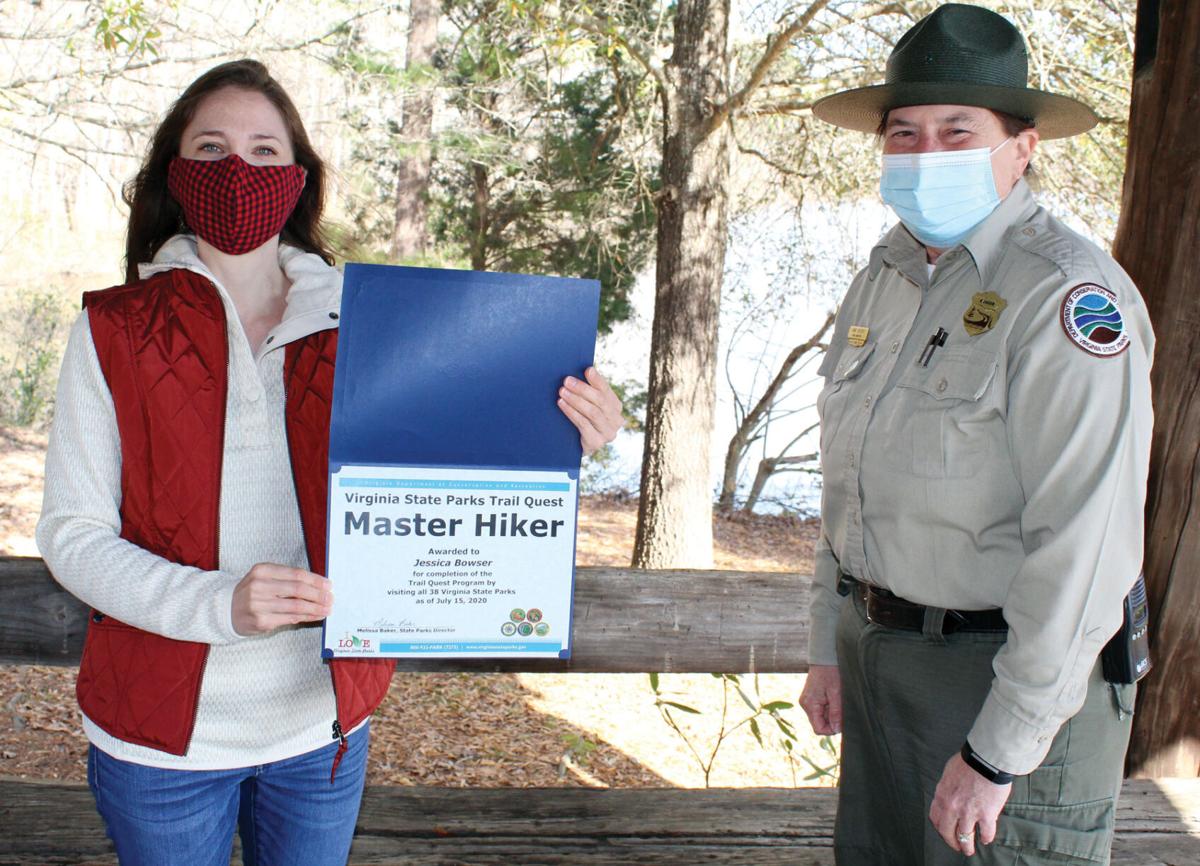 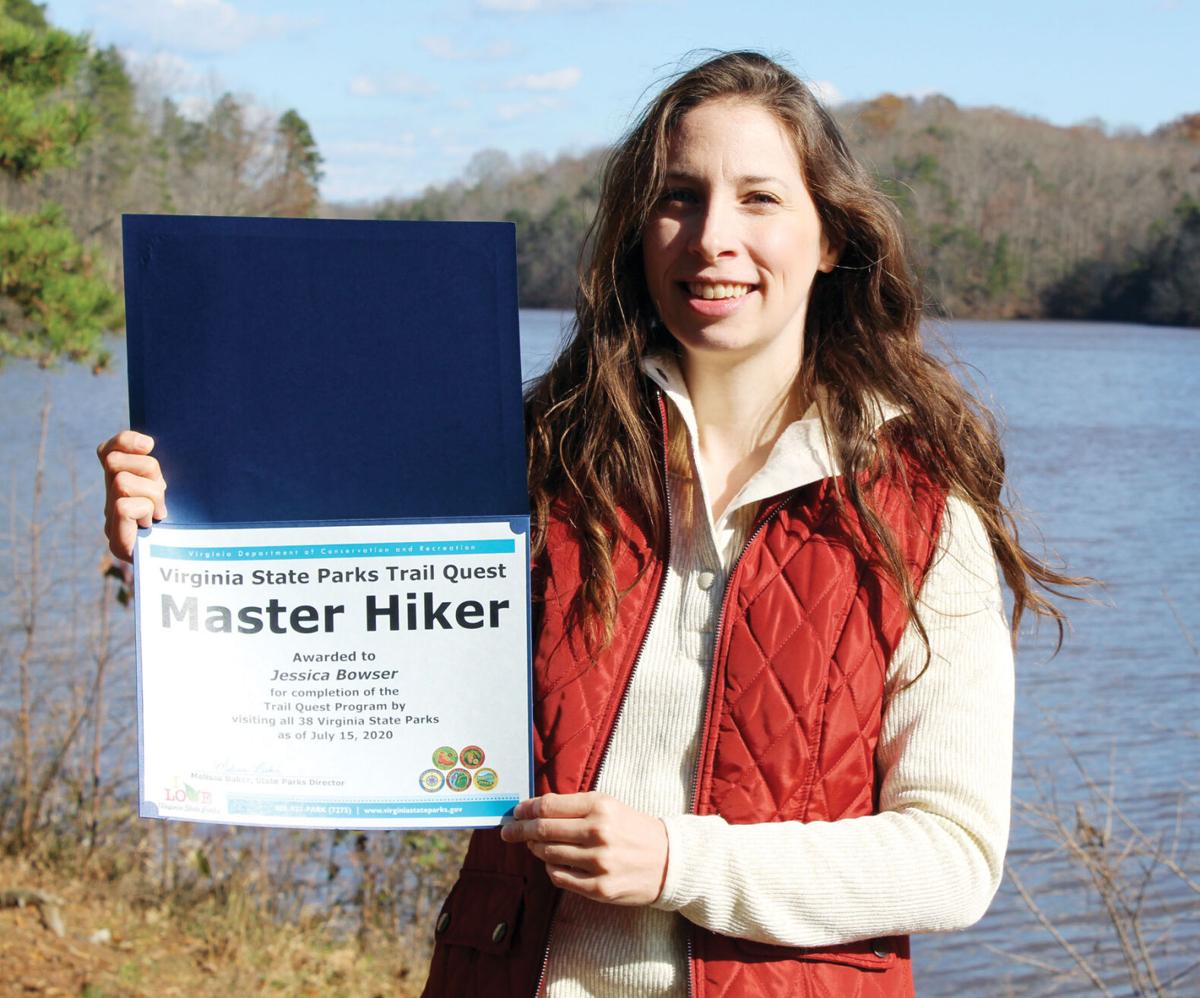 Conservation advocate and podcaster Jessica Bowser poses with her Master Hiker certificate of recognition at Holliday Lake State park after finishing a tour to visit all 39 state parks in Virginia.

Conservation advocate and podcaster Jessica Bowser poses with her Master Hiker certificate of recognition at Holliday Lake State park after finishing a tour to visit all 39 state parks in Virginia.

The idea of a state park tour was born in 2015 as Bowser was traveling in a political leadership program that met once a month in different locations throughout the state, she explained. Seeing signs for various parks along the state’s roadways, she stopped to visit a few and decided to make it a “bucket list” project.

After reaching her goal, which was five years in the making, Bowser received a Master Hiker certificate from Holliday Lake State Park Manager Anne Reeder in recognition of her accomplishment. Boswer said the challenge’s intent was to bring attention to “the amazing parks and amenities available to Virginians through our state park system.”

As was her practice on each tour stop, Bowser planned to spend at least an entire day at Holliday Lake. Her plan included taking pictures with her tripod and exploring many of the hiking trails — approximately 6.9 miles of the nearly 10 miles of which are shoreline; the rest are smaller trials. She had hoped to go kayaking but called it off because the wind was whirling at high speeds.

Reeder said she was pleased that Holliday Lake was the final stop of Bowser’s tour and enjoys the fact that many people share a love for state parks.

“Just the fact that they’re interested in the parks — they want to get out and enjoy the recreational aspect, the beauty of each park because each park is different, has its own key, unique feature typically,” Reeder said.

Reeder also appreciates Bowser’s state park advocacy, remarking that state parks need funding for positions such as lifeguards in order to free up staff members to focus on their regular duties.

Bowser is involved in Friends of Mason Neck State Park and the Virginia Association for Parks, active in lobbying the state’s General Assembly to secure funding for state parks and their staff.

Bowser also hosts the newly-created podcast “Virginia Outdoor Adventures” that debuted Sept. 1 and can be found on any online source that broadcasts podcasts such as Apple Podcasts, Google Podcasts, Spotify and more.

“I have guests on the show that talk about outdoor adventures in Virginia, everything from places to go and things to do to their own personal experiences in the outdoors. So, there are a lot of human interest stories as well as recommendations for people who are looking for ways to get outside in Virginia,” Bowser said.

“I’ve always been a big advocate for the parks, and I love the state parks,” she added. “Part of the motivation, actually, for starting the podcast is I wanted people to also be able to experience what I’ve experienced going around the state and visiting all the parks.”

Raised in Cleveland, Ohio, Bowser developed an interest in history as a child, an interest that expanded when she moved to Virginia 11 years ago. After earning a Master’s in Education degree from the University of Maryland, she landed a teaching job in Fairfax County, where she currently resides in Alexandria with her husband and two cats.

Although not currently working as a teacher, Bowser still finds intrigue at the role nature plays in the development of human history and the lessons that can be learned at state parks.

“I’m a former fourth-grade teacher and so the fourth-grade curriculum includes Virginia studies,” she said. “One thing that I fell in love with when I moved here to Virginia as a teacher was learning about the intersection of geography and history, which is so rich here, and it’s helped create the culture, and it’s helped create the trajectory of American history since so much of American history started here in Virginia.”

Bowser offered two examples of such an intersection that she discovered as part of her state park tour.

“Richmond wouldn’t be where Richmond is today if it wasn’t for the fall line on the James (River),” she said. “The colonists were pushing westward to get away from the swampland and get away from possible attacks. They started moving inland but when they got to the fall line, they couldn’t get their ships up the fall line, and so they had to stop where they were, and that’s why Richmond is where it is.”

(Note: Merriam Webster’s dictionary describes a fall line as “a line joining the waterfalls on numerous rivers that marks the point where each river descends from the upland to the lowland and the limit of the navigability of each river.”)

“Natural Tunnel (State Park in Scott’s County) is literally a tunnel that goes through the mountain, but it was formed by water, not by people,” she continued. “Today there is a railroad that goes through there. Back in the 1700s, that was the path toward westward expansion, and so people may not have gone much further west because the mountain range would have made it very difficult, but because of that natural tunnel, they were able to get through.”

Bowser’s visit to Holliday Lake State Park was her second stop in Appomattox, the first being the Appomattox Court House National Historical State Park during the tour’s first year. She enjoys seeing the rural areas of the state because they differ so much from the urban setting in which she lives.

Upon finishing the tour, Bowser encourages everyone who visits a state park to thank a park ranger for all the hard work they put into the job — a job that requires more than greeting and guiding; it also involves tasks such as hiring staff, managing a budget, overseeing projects and more, with limited resources.

“This whole trip going around from park to park wouldn’t be possible without the staff,” she said. “As I have visited all the parks and gotten to meet the staff, I’ve been really impressed with how hard they work with how little resources they have. I’m also incredibly impressed with how well these parks function and the amenities they can offer given the very small budget that they have from the state.”

Reeder said that Holliday Lake State Park was considered an “essential service” during the COVID-19 shutdowns earlier in the year. Although the public campground was closed for two months, the park was open for other activities such as fishing, hiking and picnics. The campgrounds eventually reopened but will be closed for the winter season Dec. 1. However, the park remains open to the public for normal daytime activities.

If you want more content like this, support local journalism by purchasing the Times Virginian newspaper at a local newsstand or subscribing at www.timesvirginian.com/subscriber_services to receive the print edition and/or e-edition version.